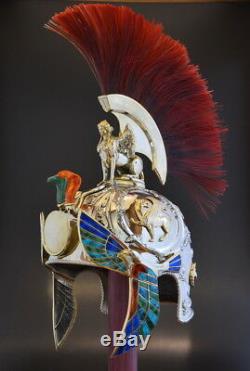 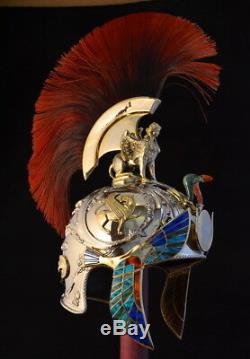 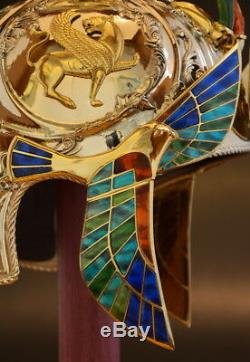 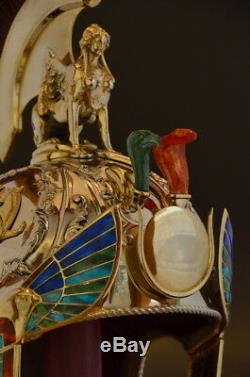 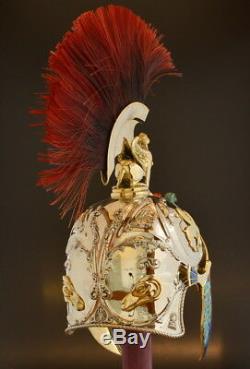 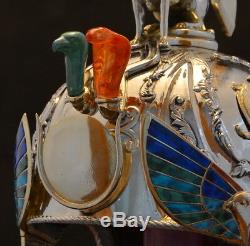 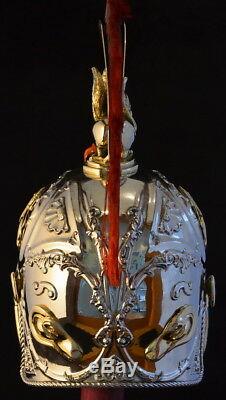 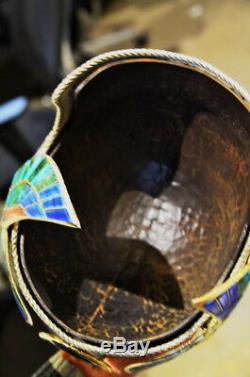 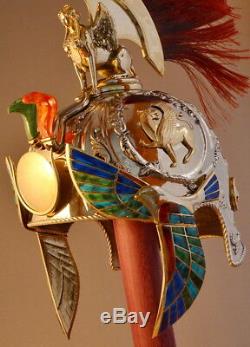 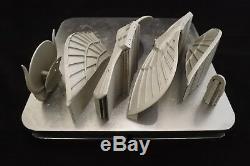 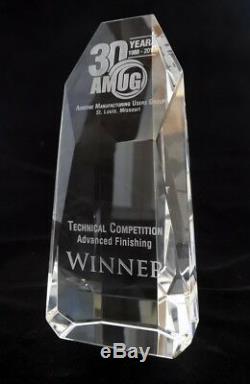 Up for sale is this magnificent Roman Helmet. It is fully 3d printed using metal additive manufacturing known as DMLS (Direct Metal Laser Sintering) and SLA resin 3d printing AKA Stereolithography. To date this is probably the most beautiful thing ever built via 3d printing process. The main part of the helmet is 3D printed in seven different parts of 316 stainless steel.

The parts then underwent a lengthy finishing process consisting of manual and electro polishing. After the metal parts had passed surface quality control (nothing less than a sparkle was acceptable), they then underwent a plating procedure consisting of copper, nickel, chrome and 24 carat gold. Features such as the gems and stones were 3D printed using plastic SLA materials called Somos Watershed XC11122 and Somos Evolve.

Each piece was then dyed, painted and finished to resemble a realistic historical representation of artifacts found in Egypt in 1. The detailing of each piece was tedious as the objective was to mimic the grain and finish of real precious gems and stones.

The red "mohawk" hair was printed using a special in house secret that allows for vertical substructures to print without the use of additional support. After printing the tiny fibers, were hand-dyed and plasticized with a molecular lubricant, finished with a clear coat. The helmet was created just couple of months ago and it has already claimed the first place at AMUG (Additive Manufacturing User Group) technical competition and became a finalist of TCT Magazine Creative Application Award 2018. So it has its own provenance already.

The inspiration of this work was a long lost galea which was offered to Mark Antony by Cleopatra in the year 34 BC. According to the legend this happened in Alexandria, Egypt after Antonys. Victory in Parthia and during the festivities related to so called "Donations of Alexandria" At the time the helmet was a talk of the town and apparently had some magical powers.

Egyptian iconography on this praetorian. Guard style helmet is symbolic to the alliance between Roman Empire and Egypt at the time. This relationship however was quite spicy and eventually enraged the Metropole and led to the war and eventually to suicidal death of Antony. He died in the arms of Cleopatra. She buried him with his most precious possession (the galea) The tomb disappeared in the fog of history and so the helmet.

The item "Legendary Roman Helmet, fully 3d printed in metal and resin, Gold plated" is in sale since Friday, July 6, 2018. This item is in the category "Collectibles\Militaria\Pre-1700\Reenactment & Reproductions". The seller is "bonboncerise" and is located in Etobicoke, Ontario. This item can be shipped worldwide.