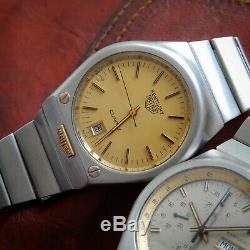 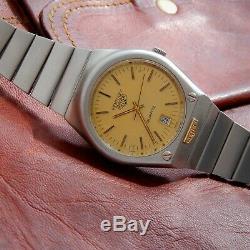 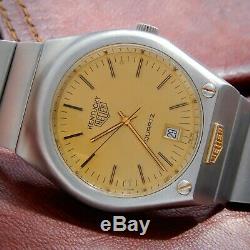 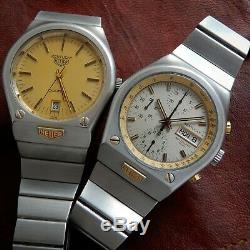 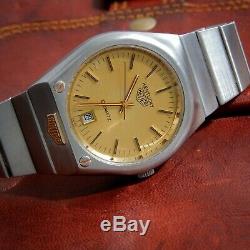 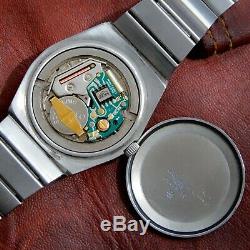 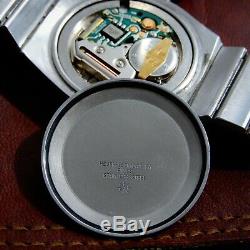 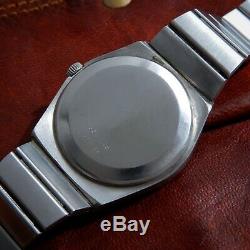 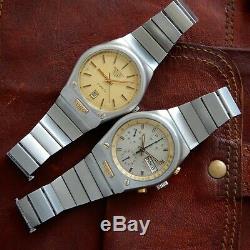 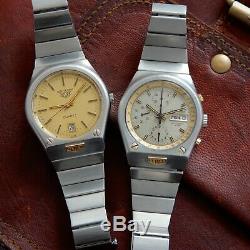 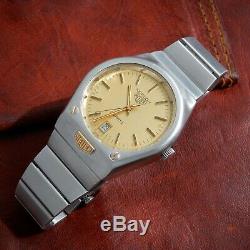 LISTING IS FOR THE QUARTZ MODEL ONLY... WANT THE 7750 CHRONOGRAPH AUTOMATIC? While most of Heuers classic 1960s and 70s chronographs were born with a strong motor racing identity, there were some exceptions, such as the Heuer Kentucky. The Kentucky was one of several models named after North American cities and icons (Daytona, Camaro, Memphis, Manhattan, Pasadena, Montreal) as Heuer focused on increasing volume in its largest market. The Kentucky also marked the beginning of the end of the Chronomatic era, being the first new mechanical chronograph since 1969 that didnt use Heuers own in-house movement. Instead, the series made use of the latest movement developed by long-time partner Valjoux, called the 7750, today still used by TAG Heuer and now branded as the Calibre 16. The Kentucky was launched in 1977 and was not only one of the last wave of new mechanical Chronograph models developed under Jack Heuers stewardship, but also shared several design cues with the 1976 Heuer Daytona- one of which would prove to be the models Achilles heel.

In his autobiography, Jack Heuer recalls the thinking behind the Kentucky design. We had designed the case for the Kentucky in the form of a horseshoe so the model would appeal to another client segment we were targeting, the horsey set, and its name was obviously chosen to conjure up thoughts of the annual Kentucky Derby. Personally I think this case was one of the nicest models we ever designed for a chronograph. When you take a close look at the case, you realise that what appears to be a fairly simple horseshoe shape is actually incredibly intricate. The top part of the case towards the 12 oclock position shares the same rounded soft form as the Daytona, but as you move towards the base of the case the curves disappear into a bluff, angled wedge.

The overall effect gives the case the horseshoe shape to fit with the name, and allowed the Heuer logo to be mounted on the bottom face of the case rather than on the dial. The case is finished with two screws on the upper-case, all of which combines to give the Kentucky a unique look. Really its everything a 70s tool watch case should be! Unusual and large at 39mm in diameter excluding crown 41mm inclusive. The quartz dial is relatively conventional, wearing the Heuer shield in the usual position and a modern QUARTZ script above the date window.

The narrow, blocky rectangular hands are typical of those used by Heuer in the late 1970s and are complemented by matching applied hour markers. A 22mm steel bracelet that is integrated with the case. Actually, the bracelet is the same as that used on the Chronosplit and Manhattan and comes with an ingenious locking pin and an adjustable, engraved clasp. By the time the Kentucky was launched, the impact of quartz watches was being fully felt by the Swiss watch brands, and many of the new watches introduced by Heuer offered quartz variants. The analogue quartz watches use the ESA 9362 module, a fairly sturdy movement that Heuer also used on other 3-hand quartz models of the same era Carrera, Verona, etc.

THE PROBLEM WITH THE KENTUCKY. (and the reason for its rarity really). There was a problem with the Heuer Kentucky- the integrated bracelet has a habit of snapping off, and cant easily be replaced. Not all of them clearly this one is perfectly fine and has lasted the last 40 odd years and bears no evidence of not lasting anopther 40... Jack Heuer tells this story in his book.

In 1977, our production was severely disrupted when two of our key suppliers unexpectedly went bankruptthe other supplier which suddenly went bankrupt was La Centrale, an old established case-maker in Bienne. For years they had been amongst our regular suppliers and we had just given them the order to produce the cases for our new Kentucky chronograph. The bankruptcy court authorised us to retrieve all the semi-finished Kentucky cases and I will never forget how one of my managers and I entered La Centrales gloomy, boarded-up factory to collect the cases. It was a spooky and very demoralising factory visit. We then took these half-finished cases to another of our case-makers and begged them to finish them.

Of course they were not happy to do this, but we insisted and they eventually agreed. When we finally received the finished cases we discovered a fault that caused the integrated bracelet to break off easily from the case and we had to return quite a few cases. We therefore made just a limited number of chronograph versions of the Kentucky and they are now much sought after by collectors. But we also used the same case to house a simple digital quartz movement so we could also have a lower-cost quartz watch in our range. This is not to say that all Kentuckys are faulty, but it does highlight the need to be careful.

The integrated bracelet on the Heuer Daytona suffers from similar issues, although it appears as though the Kentucky is more fragile. We can offer a comprehensive servicing facility we can service most watches at a fraction of the high street cost, we can look after most watches from pocket watches to trench watches to high end chronographs.

Good Luck & Happy Hunting Valiant Watch Aficionado! The item "HEUER Vintage 1970 Kentucky Quartz ETA ESA 9362 All Original Bi-Metal Steel Gold" is in sale since Sunday, June 16, 2019. This item is in the category "Jewellery & Watches\Watches, Parts & Accessories\Wristwatches". The seller is "fullywound" and is located in Folkestone. This item can be shipped worldwide.